Matt Allen purchased Virginia Auto Service in 1994 when he was just 24 years old because it was his dream to own his own auto repair shop. Even at a young age, he already had extensive experience fixing cars having worked for independent auto repair shops and dealerships since he was 16. He also worked for Porsche Motor Sport Factory Race Team touring the country on the racing teams and working with drivers such as Price Cobb & Mauro Baldi.

Matt is an ASE Certified Master Technician and served as the Chairman of the Automotive Repair Advisory Committee for the Central, Northern, and Western Arizona Better Business Bureau (BBB) where he has served since 2000.  He has also served as a Former Ford Lemon Law Arbitrator.

Tim has been with Virginia Auto Service since 1997. Prior to that he worked for NAPA Auto Parts.

Tim is originally from Chicago – he visited Arizona in the 1980’s, fell in love with the area and moved here in 1983. Everyone who knows Tim knows that he “bleeds Cubbie blue.” Tim is the proud parent of Ethan. For Ethan’s 10th birthday he gave him the trip of a lifetime- a visit to Chicago’s Wrigley Field to attend a Cubs game.

When Tim’s not working he loves to spend time in the kitchen. Every Christmas holiday season he bakes as much as 80 dozen cookies and brings them to work to share with coworkers, customers, and friends.  Cooking has special meaning for Tim because when he cooks he uses mixing bowls and utensils that were passed down to him from his mother who passed away when he as in his 30’s. He says that when he cooks with the bowls she gave him, it feels like he is cooking with her because she taught him how to cook! 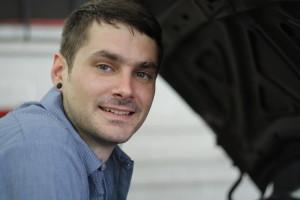 Sean is originally from Northridge, California, He spent some time in Youngstown, Ohio, before heading west to settle in Phoenix. He has over 10 years’ experience in automotive repair and has been with Virginia Auto Service since 2011.
Sean’s first car was a “many-colored” 1972 Super Beetle, although he was too young to drive it. By the time he could drive, he had moved on to a 1989 Chevy Celebrity.
In addition to cars, Sean loves photography. He has been taking pictures for over 20 years. His favorite subjects to photograph are empty spaces and abandoned buildings.
Sean is married to Aaron and they have a young son, Ash.

Burgie has worked at Virginia Auto Service since 2009.  Burgie was in the Air Force where he worked as a weapons mechanic repairing B52’s, F4s and F15s.  When he got out of the Air Force he was bitten by the “mechanic bug” and has been working on cars ever since.
Burgie’s first car was a yellow 1953 Chevy Bel Air two-door hard top. Burgie’s dream car is a 1968 yellow Corvette.
When not at work, Burgie is a remote control car enthusiast. For over 13 years Burgie has spent weekends at the Scottsdale Raceway racing one of his 30 RC cars.