Now that school is back in session for most children in the Phoenix metropolitan area, motorists will need to start paying close attention to the roadways for school zones. School zones are meant to keep children safe as they arrive at and leave school. However, there are times when these zones are a risk for both pedestrians and motorists. 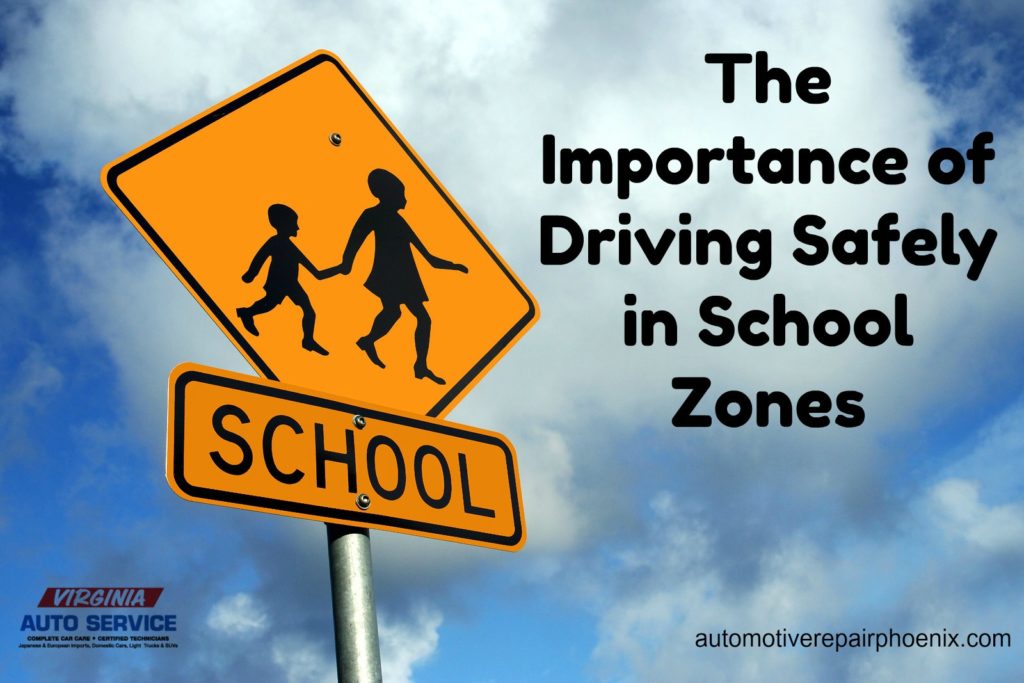 Every school year, over 55 million children across the United States head back to school. According to AAA, around 13 percent of those children are usually walking or biking to their classes. Others may pass through the school zone after exiting a bus or caregiver’s vehicle. The chaos of the busy school zone may be dangerous to children. Nancy Pullen-Seufert, associate director of the National Center for Safe Routes to School, says, “There’s a lot of activity that happens between arrival time and dismissal time that can be distracting, and that’s the piece that can make it risky for young pedestrians.” It would also seem that motorists, even those who are dropping off their most precious cargo, need a refresher course on the rules of school zone driving.

A study found that two-thirds of drivers exceed the posted speed limit during the 30-minute period before and after school.  Automated photo enforcement measures discovered that 78 percent of drivers sped in school zones, and 82 percent of drivers passed a school bus illegally. A report by Safe Kids Worldwide shows that motorists often violate stop sign rules at intersections in school zones and residential neighborhoods, with 45 percent failing to come to a complete stop, 37 percent rolling through the stop sign, and seven percent failing to slow down. According to AAA, the most dangerous time for the school zone and beyond is after school from 3-4 p.m. It is during this window that more school-aged pedestrians are killed by motorists than any other time of day.

The problem with motorists speeding in school zones had gotten so bad, some municipalities- including several in the Phoenix metropolitan area- have installed speed cameras to catch and ticket those who violate the speed limit in school zones. Kate Carr, CEO of Safe Kids Worldwide states, “In places where that’s happened, there’s been a decrease in injuries and fatalities associated with kids who are walking in school zones.”

According to the most recent year for which data is available from the National Highway Traffic Safety Administration (NHTSA), the number of traffic fatalities among pedestrians age 14 and younger went down from 391 fatalities in 2002 to 230 in 2011. The downward trend is good news, however, in 2011, an estimated 11,000 pedestrians age 14 and younger were injured in traffic accidents overall.

Motorists need to keep in mind, that it takes children a while to learn to cross the street safely. They don’t always cross where or when they should, and are not completely aware of the dangers in doing this. Information provided by the NHTSA shows that in 2011 nearly 79 percent of pedestrian fatalities among children ages 14 and younger occurred at non-intersection locations, such as between parked cars or crossing the road in the middle. Motorists should approach a school zone with the mindset that it is most likely that most of the people walking there are unaware of the laws and are unfamiliar with the operation of an automobile. James Solomon, program development and training director of defensive driving courses for the National Safety Council stresses, “Kids don’t know how long it takes to stop a car. None of that is in their thinking.”

Between 2007 and 2012, there was a 25 percent increase in pedestrian injuries for teens between the ages of 16 and 19, according to a report by Safe Kids Worldwide. This increase of injuries in this age range is likely related to the increased use of smartphones, mp3 players, and iPods stealing their focus away from the hazards of the world around them. Concerned with the upward trend of pedestrian injuries in this age range, Safe Kids conducted an observational study of 34,000 middle school and high school students walking in school zones. The study found that one in five high school students and one in eight middle school kids were, in fact, distracted by a mobile device. For this reason, motorists need to not only watch the roads closely in the school zones of younger children but those of tweens and teens as well. Carr, of Safe Kids Worldwide says, “We know that distraction is a big issue for drivers, but there’s been less focus on the issue of distraction for pedestrians. We need to teach our kids that a mobile device shouldn’t be used when crossing the street.”

Speed cameras, crosswalks, stop signs, flashing lights, and crossing guards can only offer so much protection for school children. Motorists need to be aware of their surroundings and follow the driving laws in the school zone.

Stop properly. When you come to a stop sign or crosswalk be sure to come to a complete stop. Remember, it is illegal to pass through a stationary stop sign or one that is held by a crossing guard. In school zones, any charges or fines you may face are usually doubled.  In school zones, motorists should fully stop at the stop sign, before they reach the crosswalk area. Never block a crosswalk as it can force kids to walk around your vehicle, which could put them in danger. Solomon advises that drivers,” wait a bit before driving through after the crossing guard clears the intersection. There are always one or two children lagging behind that are now going to run through the crosswalk to catch up with the rest of the group.”

Observe the speed limit. State law, specifically Arizona Revised Statutes (ARS) 28-797, provides a uniform application of 15 mph school zone traffic control for elementary and middle schools (kindergarten through eighth grades) at authorized school crossings meeting certain minimum criteria. The limit near most high schools is posted no higher than 25 mph. Nancy Pullen-Seufert of the National Center for Safe Routes to School says, “The faster you are going, the more likely you are to injure a pedestrian and to injure them more seriously.” According to the NHTSA, five percent of pedestrians hit by a vehicle at 20 mph suffer a fatality. The fatality number increases to 45 percent when hit by a vehicle going 30 mph, and to 80 percent for a pedestrian hit by a vehicle traveling at 40 mph. The NHTSA goes on to state that driving faster also means longer stopping distances. For example, when you are traveling 20 mph it takes you around 69 feet to come to a complete stop. At 30 mph, it takes you 123 feet to stop, nearly double the distance.

Stay off electronic devices. Distractions, like talking on your cell phone, have been proven to reduce a driver’s reaction time. Looking away from the road for only two seconds can double your chances of crashing. Texting while driving has been proven to be as dangerous as driving drunk. Kate Carr of Safe Kids Worldwide says, “The ability to multi-task is a myth. If you are going to drive your child to school, drive your child to school. Leave the cell phone in a place where you aren’t going to be distracted.” Remain vigilant and able to navigate the school zone completely prepared to handle any situation that may arise.

Don’t pass school buses. In all 50 states, it is illegal to pass a school bus on undivided roadways when it is stopped to load or unload children. The National Safety Council states that most children who die in a bus-related accident are pedestrians between the ages of four and seven who are either hit by the bus or motorists passing the school bus illegally. Laws will vary from state to state regarding passing a school bus on a divided roadway when the bus is traveling in the opposite direction. No matter what, all vehicles behind the bus must stop. Today, many school buses are equipped with rear cameras to catch motorists who illegally pass them.

Watch for bus warning lights. When there are yellow flashing lights on the bus that means that the bus is preparing to stop and let children on or off, and you need to give it room to do so. When the light is red it means that children are currently loading or unloading. At no time when the lights are red or yellow should you attempt to pass the bus.

Give the buses plenty of space for loading and unloading. Kids are at most risk of being hit by a car with in the 10 feet around the bus.

Take an alternate route. If you are not a parent responsible for picking up or dropping off a child, it may be best to avoid driving in a school zone altogether to avoid any frustrations.

Treat each child as if they were your own. It’s not only impatient motorists who are running late for work that are responsible for school zone accidents. Parents are just as likely to break school zone rules when they are picking up or dropping off their children. Keep in mind that even though your child has been picked up or dropped off safely, there are others still out with the possibility of being injured. Stay vigilant and follow the school zone rules and keep these children safe. You know you would want other parents to do the same for your children.

Report any hazards or dangers you notice. Should you have a “near miss” with a child, let someone at the school or authorities know how it happened. You may be alerting them of an area that could be dangerous in the school zone. Solomon of the National Safety Council says, “You need to find whoever is in charge if it’s a crossing guard, a law enforcement agent or school staff. You need to safely park the vehicle and explain what happened. Sooner or later, enough near-misses mean someone gets hit.”

At Virginia Auto Service, we care about the community we live in and want nothing more than to make it as safe as possible. We hope you find these safety tips for driving in a school zone to be helpful. For more information on school zones in Arizona check out the Arizona Department of Transportation (ADOT) web page. For further advice on how you can keep child pedestrians and bicyclists safe in school zones, you can refer to the National Safety Council’s “Back to School Safety Tips for Motorists.”