We’re sure you’ve seen it, a car pulled off to the side of the road, steam pouring out from under the hood. Maybe it has even happened to you. This unpleasant phenomenon is caused by an overheating engine. It is a common occurrence in Phoenix, Arizona, especially in the summer months. 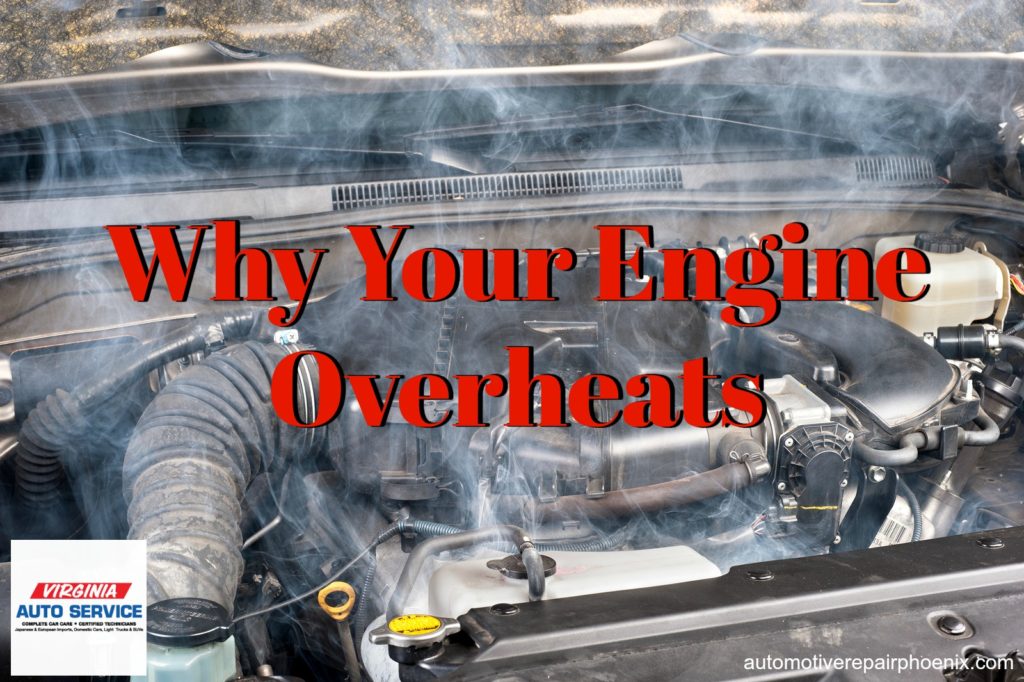 Heat is, by far, your engines worst enemy. Making yourself aware of the reasons for a vehicle overheating -and understanding the necessary preventive maintenance routines- can help you avoid major engine damage. There are some common problems that cause an engine to overheat, including a bad thermostat, blocked radiator, failed water pump, and a leaky cooling system. Some conditions are simple, straightforward repairs, and others require hours of work and expensive parts.

An overheated engine can cause serious damage to pistons, cylinders, bearings and valves, as well as other vital engine components. For this reason, you should never ignore the warning signs of overheating. You should shut down your vehicle at the first indication that your engine is operating above the preferred temperatures.

Signs that your vehicle may be overheating include:

4 Reasons Why the Engine Overheats

Most of the causes of overheating come from a lack of circulation- which can be caused in different ways.

How to Prevent Overheating

To avoid overheating, watch your temperature gauge and coolant levels and regularly inspect your belts and hoses. Make sure the radiator cap is working properly and replace it if needed. Remember to never remove a radiator cap when it is hot. Other ways to prevent overheating include:

Watch the temperature gauge on your dashboard, if it goes into the red, or the “hot engine” light comes on, pull over and shut off your vehicle to prevent damage. Remember that if your car overheats even one time something is wrong with your vehicle and it needs to be fixed.

If your engine has overheated, Virginia Auto Service is here for you. We are your go-to in Phoenix, AZ for reliable, high-quality auto repair services. Call (602) 266-0200 or schedule an appointment online.